Cornhole is a beloved American pastime that people of all ages can enjoy. It is simple yet challenging and can be played indoors or outdoors. It's perfect for tailgating before football games, backyard barbecues, and house parties. If you've never played cornhole before, the rules may seem a bit confusing. But don't worry - this blog post will give you everything you need to know to get you started in no time!

"Even though this article is 100% accurate, it is as brief and straightforward as possible. The goal is to get everyone ready to play in minutes."

Let's start with the basics.

First, I want to clarify that even though this article is 100% accurate, it is as brief and straightforward as possible. The goal is to get everyone ready to play in minutes. I'm confident that the pros don't need a refresher on the rules of cornhole. But just in case, if you need to go over all of the official rules, you can find the official ACL rules manuscript here. Ok, let's get to it. 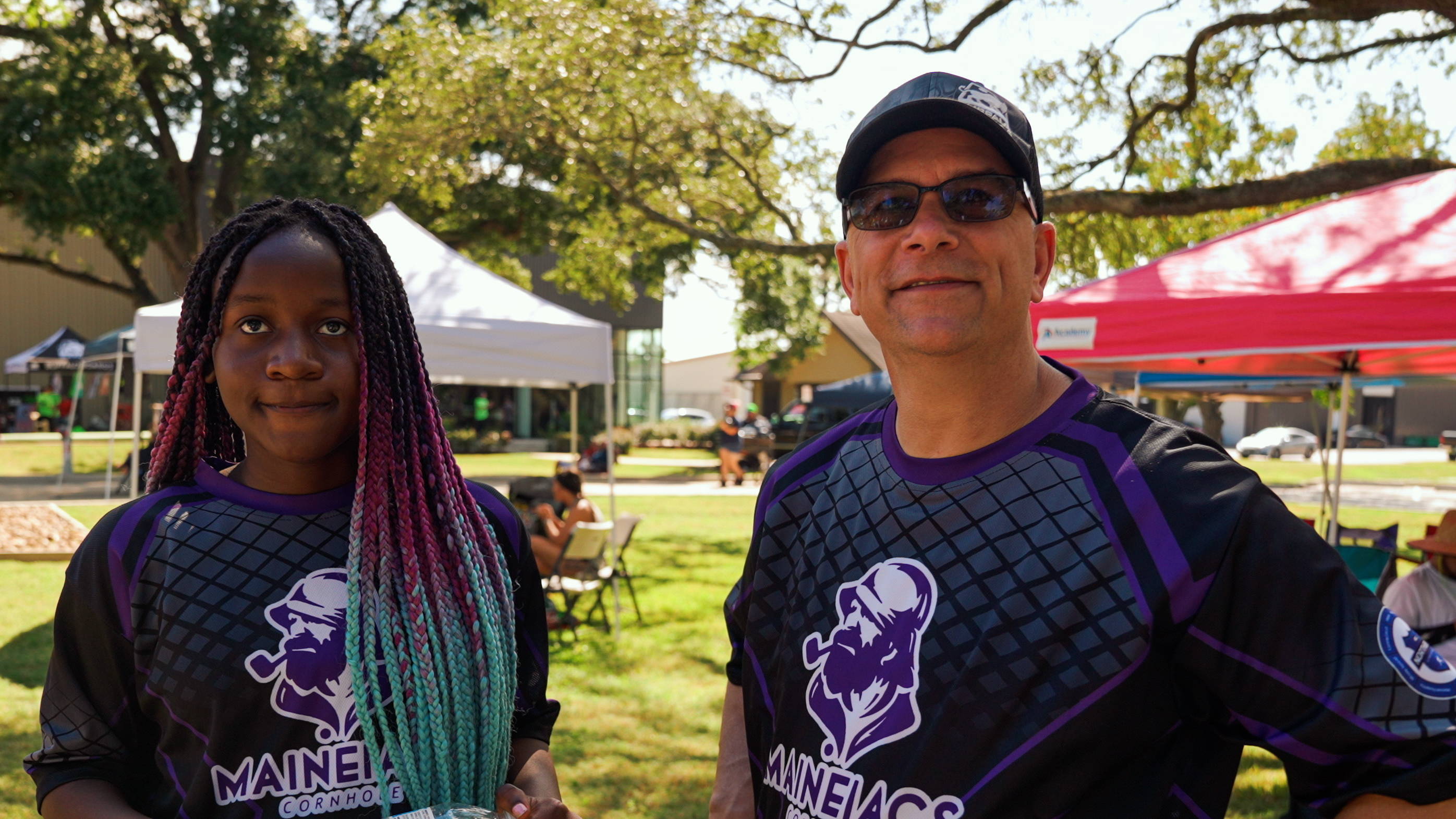 People of all ages can enjoy cornhole: a father-daughter team at the 2021 Buffalo Cash Bash

Cornhole is similar to tennis in that it can be played individually against a single opponent (singles) or between two teams of two players (doubles). The game is played with eight bags, with each team throwing a set of four matching bags.

The game's goal is to score points by either landing a bag on the board (one point) or putting a bag through the hole (three points). The first team or player to reach 21 points wins the game! However, there's a catch: cornhole uses cancellation scoring. But don't worry, we'll explain how that works in a bit. 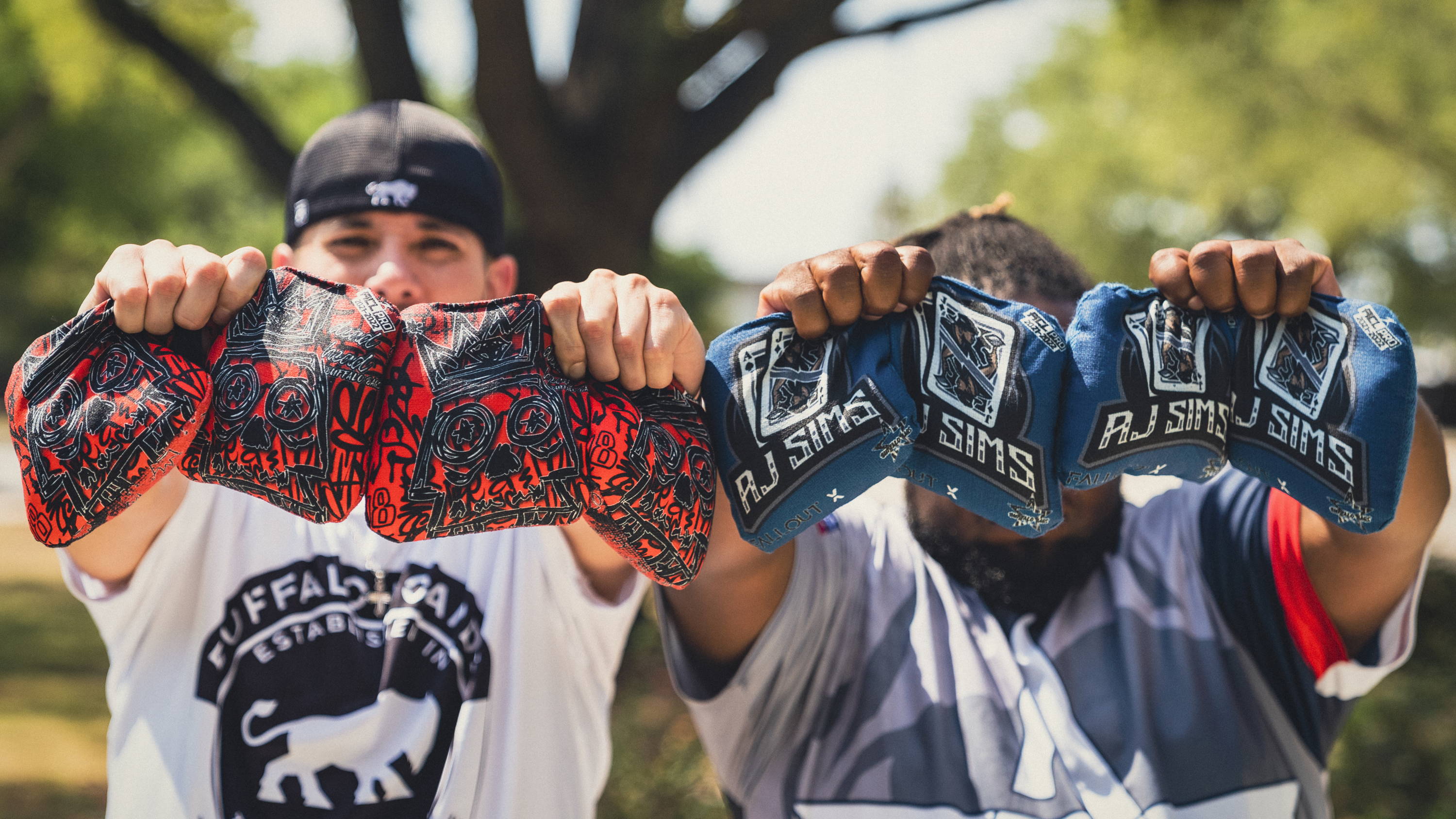 To be able to play you need two sets of cornhole bags with different colors or graphics.
On the left, a basics set of Dead Heads, and on the right a set of custom Fallout Xs

Setting up the boards and players

Boards are positioned opposite each other, precisely 27 feet from front edge to front edge. However, feel free to reduce the distance based on the players' skills and experience.

Opponents must throw from opposite sides of the same board. Directly next to the board, there is an imaginary three-foot-wide pitcher's box that runs the length of the board. Players must stay within this space when throwing. Also, partners must stand in the same lane in a doubles game.

A diagram of the setup of a cornhole court. Feel fre to adjust the distance between the boards if needed.

Players should flip a coin -or spin a bag- to decide who gets to throw first. The game continues by alternating throws between the two opponent players. After all 8 bags have been thrown, we say that an inning is over, and it's time to count the score.

If you don't have a coin at hand, use a cornhole bag to decide who throws first.

As we mentioned in the intro, landing a bag on the board is worth one point, and getting a bag in the hole is worth three points. However, one of the most unique aspects of cornhole is its use of cancellation scoring. In cancellation scoring, one player's points cancel out their opponent's points. Using this method, only one player can score in each inning.

This is easier to understand by using an example.

After all eight bags have been thrown, this is what the board looks like:

After the players throw all eight bags, it's time to tally up the score.

The game continues until a player or team reaches 21 points or more at the end of an inning.

Some folks like to make up rules when playing cornhole. The most common is that you "bust" if you go past 21, and your score goes back to 11 or 15. Some people even say that you need to win by two or that bags hanging over the hole count as two points. It's ok to apply these house rules, but don't rely on them, as even at the most casual tournament, they simply aren't part of the game.

It is worth noting that it doesn't matter how a bag gets into the hole or off the board. Players can use their throws to drag bags in the hole or push them outside of the board. So a point doesn't really count until after all eight bags have been thrown. Also, if both players score the same number of points, it's called a "wash," and nobody scores.

It's also important to know that the player or team winning the inning throws first in the next. If nobody scores, the team or player who threw first during the last inning will throw first again.

It's supposed to be fun!

The best thing about cornhole is that it brings friends and families -and even strangers- together. Everyone, regardless of age or fitness level, can have a ton of fun and create everlasting relationships with this game.

So, go ahead and put this article down; it's time to throw some bags! 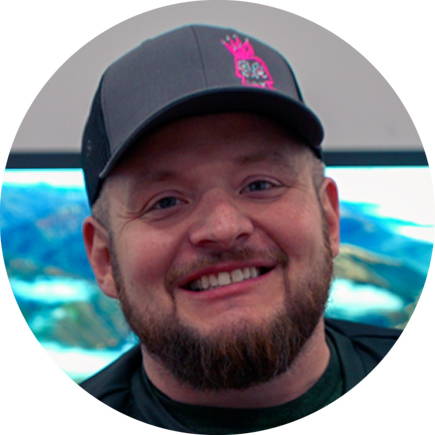 Anthony was one of the first Buffalo Boards brand ambassadors ever. In the fall of 2021, he moved to Texas to join the Buffalo team full-time as the head of Customer Relations and Logistics.

Enter your email and stay on top of all of our promotions, releases, and events.